On Saturday August 15, 2015 we were proud and excited to attend the COMOX Air Show with CASARA Vancouver Island Zone participants from our Nanaimo location as well as aircraft from our Victoria and Port McNeill locations. This airshow is taking off for the second time in three years. Our booth and aircraft space was snuggled nicely next to a 442 Transport and Rescue Squadron CC-115 Buffalo aircraft and CH-149 Cormorant helicopter.

We set up our booth and demonstration space highlighting not just some of our more recent training missions but also our radio and ELT systems for DF and homing as well as our latest GARMIN GPS units for air and ground search navigation. Throughout the day, we enjoyed a very high number of interested folk as well as one or two applications to join our volunteers.

The airshow featured military static and flying displays from across the Canadian Forces. In addition, a large variety of unique, historic and modern military and civilian aircraft from across North America graced the sky and tarmac. Whilst the weather was not that good in the morning, the clouds cleared away after lunch and the Sun came out for a spectacular set of flying demonstrations in the afternoon. We were delighted by both military displays such as with the Cormorant, 407 Squadron CP-140 and a single CF18 fighter jet but also the veritable RCAF Snowbirds display team and some incredible, dare-devil flying both singly and in combination from many civilian pilots. Ms. Teresa Stokes from Gene Sourcy Airshows was absolutely amazing in her wingwalking on the Grumman “Showcat” biplane as she stayed on the wing top whilst her pilot threw the biplane around the skies in high ‘G’ maneuvers to the delight of the large airshow crowds. 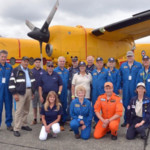 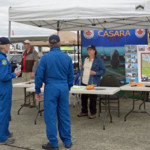 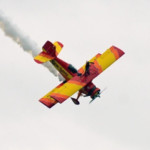 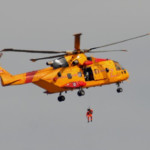 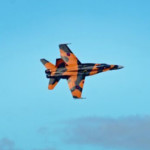 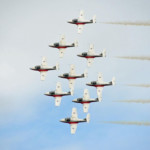